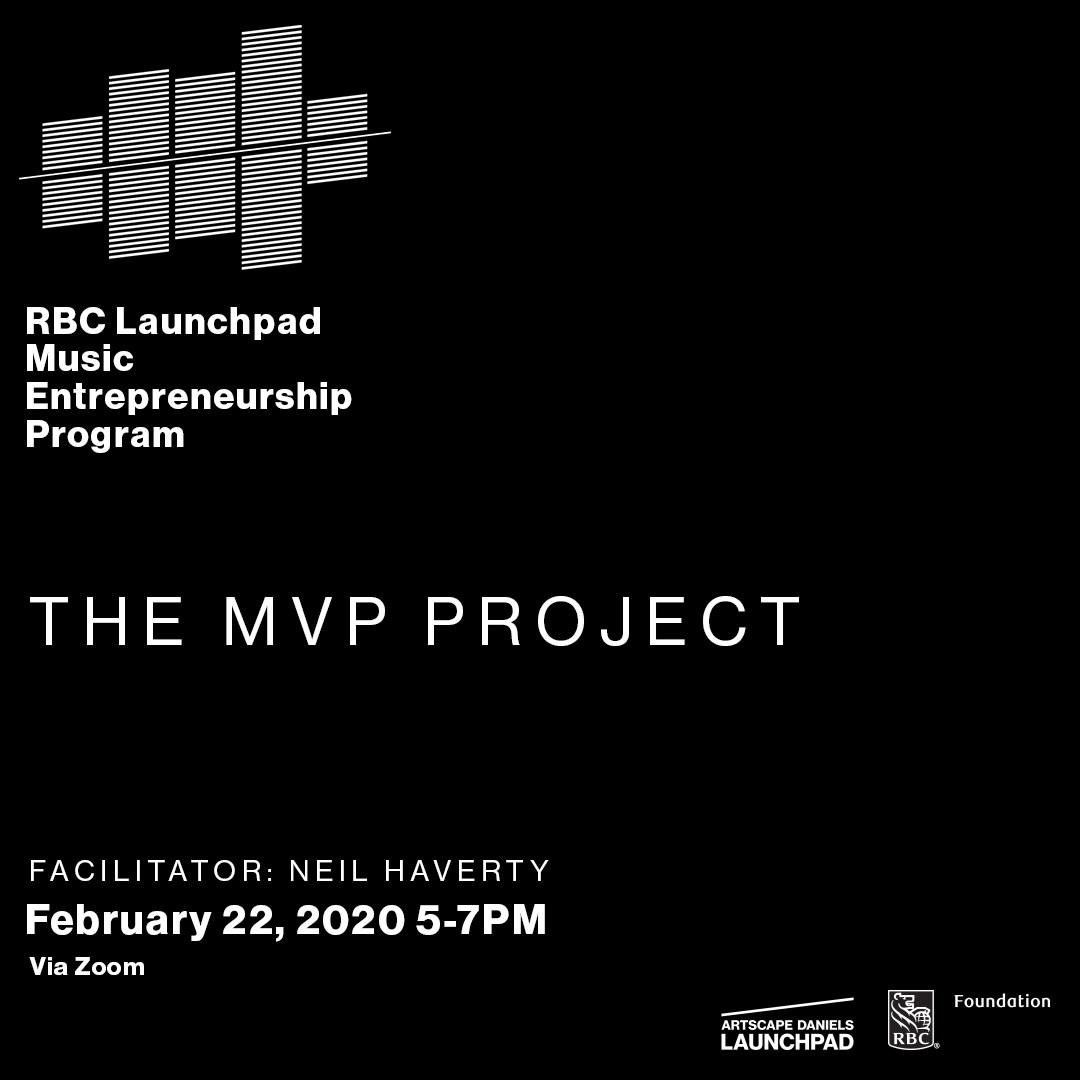 Join us for a conversation with Neil Haverty, senior manager of the MVP Project and Prism Prize. During this 2 hours talk, Neil will take participants through the application process for the next call opening on March 1st, 2021. We will also be joined by previous recipients: Joël, angelicamilash, Mikayla Fasullo, and Keenan Lynch.

The MVP Project is a joint RBCxMusic and Prism Prize initiative, administered by the Academy of Canadian Cinema and Television (the Canadian Academy) with support from the RBC Foundation that provides support for music videos created by emerging artists. The MVP Project aims to help Canadian creatives explore their craft, hone their filmmaking skills, and encourage growth within the music and film industry.

The MVP Project is open to recording artists and/or directors who identify as “Emerging Artists.” Support for artists and storytellers will be offered through music video production grants valued between $5,000 and $15,000. In addition to the grants, successful candidates will receive mentorship, networking opportunities, and other resources. There is $150,000 of funding available in each round.

Joël: Toronto-based R&B artist, dancer, and songwriter Joël is paving his own road, writing his perspective in nuenced by experiences and disappointment ... with false friends ... with absentee family ... with himself. Joël has used his unique blend of influences to craft his own sonic lane, with 10+ Million streams to date across his first two EP's ""GRUNGE GOSPEL - Side A and Side B"".

With the recent release of GRUNGE GOSPEL - Side B, Joël looks to grow his audience with a compelling video for the lead single ""On Point"". Joël will channel the energy of the iconic film Love & Basketball, while paying tribute to one of his fallen heroes... Kobe Bryant.

angelicamilash is a 21-year-old video director, editor and artist. Originating from the South of Russia, angelicamilash moved to Toronto, Canada as an international student in high school. With her growing interest in the local arts scene and culture, she quickly found herself involved in various film productions around the city, learning the ropes by assisting on every set she could get her hands on. By the end of her first year of university, angelicamilash landed an opportunity to 2nd assistant direct a CBC Gem digital series “The 410,” where she gained a deep appreciation for long-format narratives. That same year she was selected to take part in the Forbes-praised pilot creative incubator HXOUSE, all while working towards completing her BFA in Film Studies. She is the creative force behind videos with artists Jessie Reyez, Nicky Romero and WizTheMc and brands Topshop Canada, Hudson's Bay, and Netflix, just to name a few.

Mikayla Fasullo is a passionate Producer working in the commercial, narrative short/feature, and music video market. She has produced for companies such as Fela, Mad Ruk, Kid Studio and Pique to name a few. Her clientele has ranged from artists such as Jessie Reyez, WizTheMC and 88GLAM to brands like Netflix, Roots, and Beats by Dre. Dropping out of Ryerson Media Production after year 1, she quickly grasped the importance of relationship building and hands-on experience. Mikayla continues to expand her skill in this ever changing industry while also teaching the craft of filmmaking to the younger generation. She brings together the strongest team with the creative and logistic leadership needed to share your story, within your budget of course.

Keenan Lynch is a CSC nominated Cinematographer based in Toronto, Canada. Keenan’s Cinematography is driven by his passion for art and culture. His understanding of light, space, and movement enables him to create powerful images that give each project a unique voice. His portfolio includes a diverse collection of music videos, shorts, and commercials.

Join Zoom Meeting
The zoom link and password will be sent in your email.  Please make sure to check your inbox.

RBC Launchpad Music Entrepreneurship Program is a 4-month educational initiative dedicated to supporting and empowering local emerging artists, music creators, and entrepreneurs. The new edition of the program welcomes 50 participants between the ages of 18 to 35 that have been selected from more than 400 applications from all over Canada.

As part of this initiative, we are offering a number of music entrepreneurship workshops that are open to the Launchpad community and the public. Please note, some extra curriculum materials might be only available for the program participants.

Photographs and/or video will be taken at this event. By taking part in this event you grant the event organisers full rights to use the images resulting from the photography/video filming, and any reproductions or adaptations of the images for fundraising, publicity or other purposes to help achieve the group’s aims. This might include (but is not limited to), the right to use them in their printed and online publicity, social media, press releases and funding applications. If you do not wish to be photographed please inform an event organiser.